Get to Know us Better

The Festival (and Tour) are created by Executive Producer Sean McLeod, and are a production of the New York Institute of Dance &  Education-NYIDE, and the Kaleidoscope Dance Theatre.  The tour is presented by NYIDE with the National Parks Arts Foundation and Reaching for Higher Ground Consulting. It will present a  series of events across the country from major cities to rural regions, offering a menu of optional formats designed to best suit the needs of  the audience, the community, and our sponsors.

The Kaleidoscope Dance Theatre is an innovative African American founded, professional ballet and modern dance company that has touched the lives of thousands of people with it’s tangible messaging and life change work in Central New York, New York City, across the Nation, and around the Globe. Kaleidoscope Dance Theatre’s mission is to illustrate through the arts the abundant resources and enrichment, which minority persons, women, and people of color bring to our lives and community.

The NYC and Auburn Based Dance Company has had an incredible impact through a variety of projects, including the Annual New York Dance Festival, Concerts, Multicultural Initiatives, Assemblies, and Workshops for students and adults throughout the region and the world.

The New York Institute of Dance & Education Inc. (NYIDE) is a mold breaking corporation that uses communication expertise drawn from the arts to create an operating system to leverage how performance impacts corporate America.  In addition to traditional artistic offerings, the Institute has built a respected track-record in Management and Leadership Consultation, Messaging Design for Marketing and Promotions, Conflict Resolution, and celebrated Race & Diversity Training. 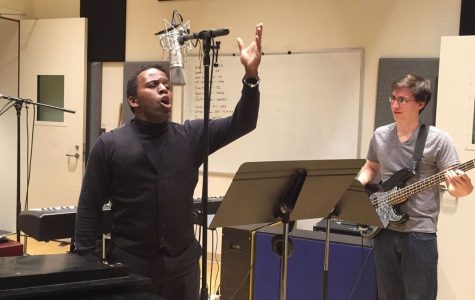 A Soundtrack for Harriet Tubman

A WOMAN CALLED HARRIET is a musical created in the early 1990’s by Sean McLeod that was based on the original 1972 script Harriet Tubman written by the gracious Eula A. Lamphere of Weedsport, NY. Eula sought out a team to bring her manuscript to life in a musical. Her search led her to Sean McLeod after becoming familiar with his dramatic play on Harriet Tubman, “A Moment in History”. Mrs. Lamphere and the team offered Sean the commission and the undertaking of the conversion from play to musical. As he worked, Sean could not find a person to write the music, so he decided to write the music himself. After completion, he enlisted the help of Gospel Director and Conductor Frank Jones to help him orchestrate the music for piano. Sean’s music for the musical included the title track “Come on Harriet”, “I Got to Run To Be A Free Man”, “Going Across That Land”, and the song sang by the William Seward’s character, “Harriet’s Lullaby”! The musical’s opening number is Sean’s interpretation of the Negro National Anthem “We Will Overcome”, but as he heard it for Harriet Tubman’s journey in the song, “I Know That We Will Overcome.”

The Musical premiered June 24, 1993. A WOMAN CALLED HARRIET – A musical tribute chronicling the life and heroism of Harriet Tubman, the Moses of her People.

All of this work, footage, and music was thought lost in a 9 alarm fire at the New York Institute of Dance & Education, but a box of unmarked video tapes in 2013 uncovered by McLeod’s daughter provided the connection to the history and fingerprint to recreate the music. Astonishingly, 2013 happened to be the year of Harriet Tubman’s centennial.

In 2013 the Rochester Oratorio Society and Maestro Eric Townell helped revive two selections from the score with a hundred and fifty voice choir and the playing of Frank Jones once more for a concert at the Hochstein Music Hall in Rochester NY.

In 2016, upon hearing of the Tubman music, Joseph Hagen approached members of the Empire Film Music Ensemble who are also students at Eastman School of Music to join this movement to recapture this music in full scored fashion.  A week later in a meeting in Rochester, NY the group’s leadership; Founder & Artistic Director Michael Staffeldt, Assistant Director and Personal Manager Adam Sadberry, Assistant Director and Resident Composer Max Berlin, Assistant Director and Arranger Joe Hagen, Assistant Director and Social Media Director Ben Escobar, and Assistant Director and Choral Organizer Kat Gorlova, met with Composer, International Producer, and American Choreographer Sean McLeod to discuss the revival of McLeod’s music from the lost 1993 musical.  In the meeting McLeod explained a process that would morph the “A Woman Called Harriet” musical into a new presentational form entitled “A Soundtrack for Harriet Tubman”.  This new approach would aid in the commemoration of Tubman’s legacy which is finally catching steam nationally.  In addition to writing the original music, McLeod also grew up in the Auburn, NY church Harriet Tubman founded, as a child played nearly weekly at the Harriet Tubman Home (now slated to become a national park) after church services where picnics often happened while growing up. McLeod is also a direct descendant of a rescued slave carried to freedom by Tubman.

The Inaugural Harriet Tubman Freedom Music Festival launched as part of the 25th Anniversary of the New York Dance Festival, July 12, 2016 in Auburn, NY – the resting place of Harriet Tubman.

What does the Tour Do?Who is the National Arts Parks Foundation?Who is Reaching for Higher Ground Consulting?

A Concert of Inclusion

The Harriet Tubman Freedom Music Festival on Tour brings a powerful concert of inclusion and hope to cities around the nation! The inaugural concert launched July 2016 in Auburn NY, the resting place of Harriet Tubman. Created by Composer and International Producer Sean McLeod, the tour’s headliner, moments after his first note we knew immediately that Harriet’s Soundtrack and message needed to be heard nationwide. The tour is about allyship and power messages.

Action you too can take!

This concert shows direct support for inclusion, equity, women & girls, boys & men, diversity and sustainable choices. Your support go directly to spreading the causes of good in the name of one of America’s greatest icons of change, Harriet Tubman.  The Harriet Tubman Freedom Music Festival tour is all about inspiration and meaningful participation in helping people realize the power of listening and collaboration.  It is a concert about possibility filtered through the actions of Harriet Tubman.  Action you too could take.

A Non-Profit Foundation offering Artist in Residence Programs, Museum In-Loan Programs, and Workshops in conjunction with our National Parks.

Reaching for Higher Ground Consulting is a Communication, Performance, and Development Company. Through a unique Conceptual Consulting module, RFHGC is able to address many of the challenges associated with communicating clearly, managing personalities, personnel motivation, and vision management.

An uplifting musical tribute that pays homage to the warrior, visionary and faith walker Harriet Tubman. Her courageous work has benefited all generations yet she only has a two line mention (if that) in the schools’ text books. This woman’s name should be sung, taught, honored and danced to lift her spirit up like she did for mankind. This celebration is long overdue. It is time to collectively take a stand to make the choice to contribute what you can to get this tribute on the road.

Sean, your event honoring my families and all my relatives AUNT HARRIET TUBMAN, was amazing, awesome, uplifting. The musical performers, including you of course, were crazy talented all voices were angelic. The songs chosen filled my soul, I was truly moved! I could go on and on, but then I would never get done with my post. I thank you so much for all you have done. It is greatly appreciated.. GOD BLESS YOU!!

A wonderful show, with marvelous music and dancing, on a warm summer night in the lovely little plaza where Auburn is experiencing a downtown renaissance. Such a harmonious (in every sense of the word) gathering, dedicated to the memory of our good and great local heroine. A good time was had by all. Thanks to Sean McLeod and all the people who performed or contributed in other ways to make this happen. May it be the first of many.

I had the pleasure of attending the “Inaugural Harriet Tubman Freedom Festival” featuring Auburn native Sean McLeod. The performers along with Mr. McLeod presented an engaging and entertaining night of music at the beautiful State Street plaza. I would like to thank you for the exceptional music experience you gave us with your show. It was definitely one of the finest shows of the season. I’ll certainly be looking forward to your next event.