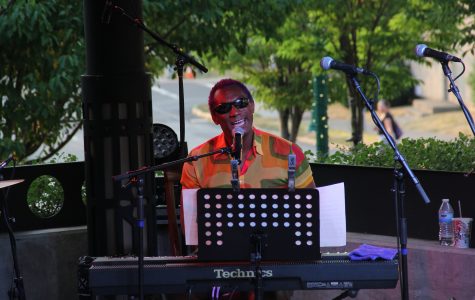 Thomas Warfield is the founder and artistic director of PeaceArt International and director of dance and faculty member at the National Technical Institute for the Deaf at the Rochester Institute of Technology in Rochester, New York.  He is the director of the RIT / NTID Dance Company, associate director of Kaleidoscope Dance Theatre at the New York Institute of Dance, as well as the vocal soloist at Unity Church.

Having a minister for a mother, conductor for a father, and being the nephew of internationally renowned singers William Warfield and Leontyne Price, it is no small wonder that at the age of 4, while studying piano, Thomas Warfield began a career on the stage. Thomas wrote his first play in the 6th grade about  African- American, Dr. Daniel Hale Williams, the first open-heart surgeon, and directed A Raisin in the Sun his senior year in High School. At ages 17 and 18, he won the regional Omega Psi Phi Contest’s vocal category for two consecutive years.

His 14yrs. with the Opera Theatre of Rochester, and performances with the New York City Opera and Metropolitan Opera afforded Mr. Warfield the experience of working with many of the world’s leading artists, including directors Franco Zefferelli and Spike Lee, composers John Adams and Marvin Hamlisch, scientist Carl Sagan, singers Placido Domingo and Beverly Sills and many others.

While a music & theatre major at Nazareth College, Thomas Warfield’s vocal repertoire expanded into German Lieder and French Chansons. Some of his numerous theatrical productions have included: directing & producing  multi-cultural /multi-arts concerts, the “Tinman” in The Wiz, “Tulsa” in Gypsy, the “MC” in Cabaret, and “Scipio” in Porgy and Bess, cabaret singer, guest vocalist in churches around the world, dozens of operas and musicals, along with performing plays of Ibsen, Checov, Racine, and playing Shakespeare’s Hamlet. Thomas Warfield began ballet training with Olive McCue in Rochester, NY. He’s held scholarships at The School of American Ballet, Martha Graham School of Contemporary Dance and The Joffrey Ballet School in New York City.

In 1988, Mr. Warfield was invited to perform Lestor Horton’s The Beloved, coached by Carmen DeLavallade, at the Dance Theatre of Harlem’s Open House. For 10 years, he was invited to dance/choreograph at The Yard (a performing arts colony on Martha’s Vineyard). Jane Dudley asked him to perform her solo Time is Money (the first time this work was performed since Ms. Dudley’s own performance in 1935) in NYC for the New Dance Group Celebration and film, at Bennington College, and in London, where the British paper, the Morning Star wrote, his “…sensitive, superbly trained body filled every word and every movement with bitter meaning.”

As a professional dancer, singer, pianist, actor, composer, choreographer, music & theatre director, teacher, producer and poet, Mr. Warfield has traveled to dozens of cities throughout the U.S. as well as Hong Kong, London, Tokyo, Paris, Amsterdam, Rome, Athens, Taiwan, Bangkok, Seoul, Stockholm, mainland China and Macau – where he was associate director and guest artist for a Chinese dance company, and decorated as an honorary citizen of Macau. For 2 years, Thomas was dance captain and performer with the Viva Musical Circus in Japan (a Japanese version of Cirque du Soleil) – a goodwill collaboration between American, Japanese and Russian (Moscow Circus) artists.

The city of Rennes, France invited Mr. Warfield (accompanying Rochester’s Mayor Johnson), as the only performing artist, to present a solo concert in Rennes in celebration of the 40th anniversary of Rochester/Rennes Sister Cities Association.

Receiving a Research Fellowship, Thomas Warfield was a MFA degree candidate at the University of Utah, where he founded and was president of DanceArt, a performing arts company dedicated to social and environmental awareness. The group was nationally recognized for raising funds & consciousness about Romanian orphaned children afflicted with the AIDS virus. At the University of Utah, Thomas served as president of the Fine Arts Student Council, a member of the University’s Liberal Education Committee, a founding member of the Multicultural Board, and a teaching assistant in the Ethnic Studies and Modern Dance Departments, Mr. Warfield represented the University of Utah at three American College Dance Festivals, and in 1991 was an invited guest speaker at the National Graduate Students’ Conference on Interdisciplinary Studies at Lehigh University in Pennsylvania.

Thomas Warfield is the founder and artistic director of PeaceArt International, a not-for-profit (501c3) local/global outreach organization utilizing the arts to foster world peace and dedicated to the multidimensionality of the creative human experience, facilitating greater human understanding and building community through individual and collective creativity in the arts. The international publication Planetary Connections wrote that PeaceArt International helps define peace “… by creating rich and meaningful experiences for people to share their ideas with one another.” (Winter 1994).

Mr. Warfield is a freelance dance critic for Gannett Newspapers. His poetry has won international awards and is published by International Press. Mr. Warfield’s original idea and project of creating “A Global Poem In Praise Of Peace” has garnered global recognition by letters from Leonard Bernstein, Mother Teresa and hundreds of others. Mr.Warfield’s music compositions are featured on a CD benefiting community anti-violence programs. His own, self produced, CD, Celebrate the Moment, featuring all original songs, with vocals and piano accompaniment by Thomas Warfield is sold throughout the world.

Mr. Warfield has served as an adjudicator for the American College Dance Festival, Omega Psi Phi Talent Contest, The Leontyne Price Vocal Competition, the Idaho Council for the Arts and the Arts and Cultural Council of Rochester. Mr. Warfield is listed in “Most Outstanding Young Men in America,” and “Who’s Who Among University Students.” He is a National Dance Association Awardee, recipient of ‘The Creative Community Service Award’ from the University of Utah, and ‘The Certificate for Outstanding Leadership and Moral Sensitivity’ from the Greater Rochester Community of Churches. He was awarded the 1999 Dance Award from the Circle of Colors Foundation, and in May 2000 was given an award for volunteerism from The United Nations Association.

Mr. Warfield is a member of the Metropolitan Opera Guild, Dance Critics Association, International Dance and the Child, the Earth Society Foundation, the National Peace Foundation, Association of American Cultures, the Human Rights Campaign Fund, Amnesty International and Greenpeace. He is a founding member of both World Dance Alliance (where he serves on the Int’l committee for Africa) and International Association of Blacks in Dance, and serves as vice-president of two boards: Peace For Education and The China Millennium Council. He is on the advisory board of International Organizations of Rochester, NY, and a former board member of Young Audiences, Inc. Thomas attributes his passion and blessings in life to the SPIRIT of love.